Let everyone see the story of your colony(ies) over time. Pictures, developments, success and failures, what works / what doesn't, and your plans for expansion as time goes by!
Post Reply
21 posts

So I started this project probably over a month ago so I will need to fill you all in on what's been going on. Instead of doing it as one massive dump I will make different posts like a normal journal would and just go on from there.

So a few months ago I went on my first ant hunting trip. Took a drive down to the Joshua Tree national park in Southern California after some heavy rains, where the Acromyrmex Versicolor were having their nuptial flights en masse early that morning. I met up with two guys I met from the Formiculture forums (one of them is a nearby GAN farmer) and my son. Well I caught one queen and the guys wanted to go somewhere else, because one of them already had too many Acro Queens and the other wants nothing to do with leaf cutters(they are pretty difficult to raise). But after hours of not getting much else other places I drove back with my son and grabbed two other Queens I saw foraging in hopes they would at least lay brood and I could buy fungus for them later

After a week, two of the Queens died and all that remained was my very first Queen, no brood no fungus. But luckily for me the GAN farmer in my city sold me three more Queens and two pea size balls of fungus for 30$. 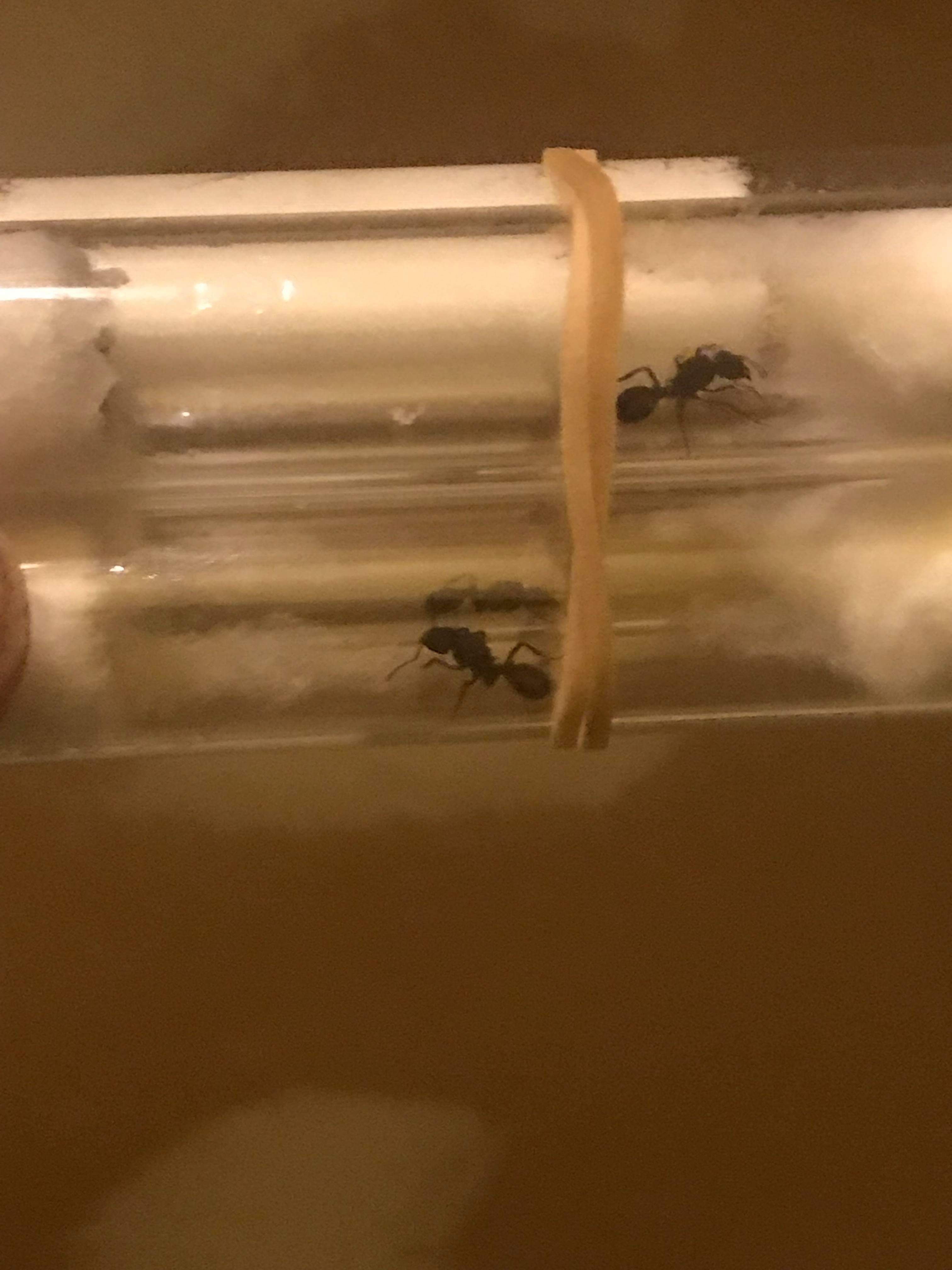 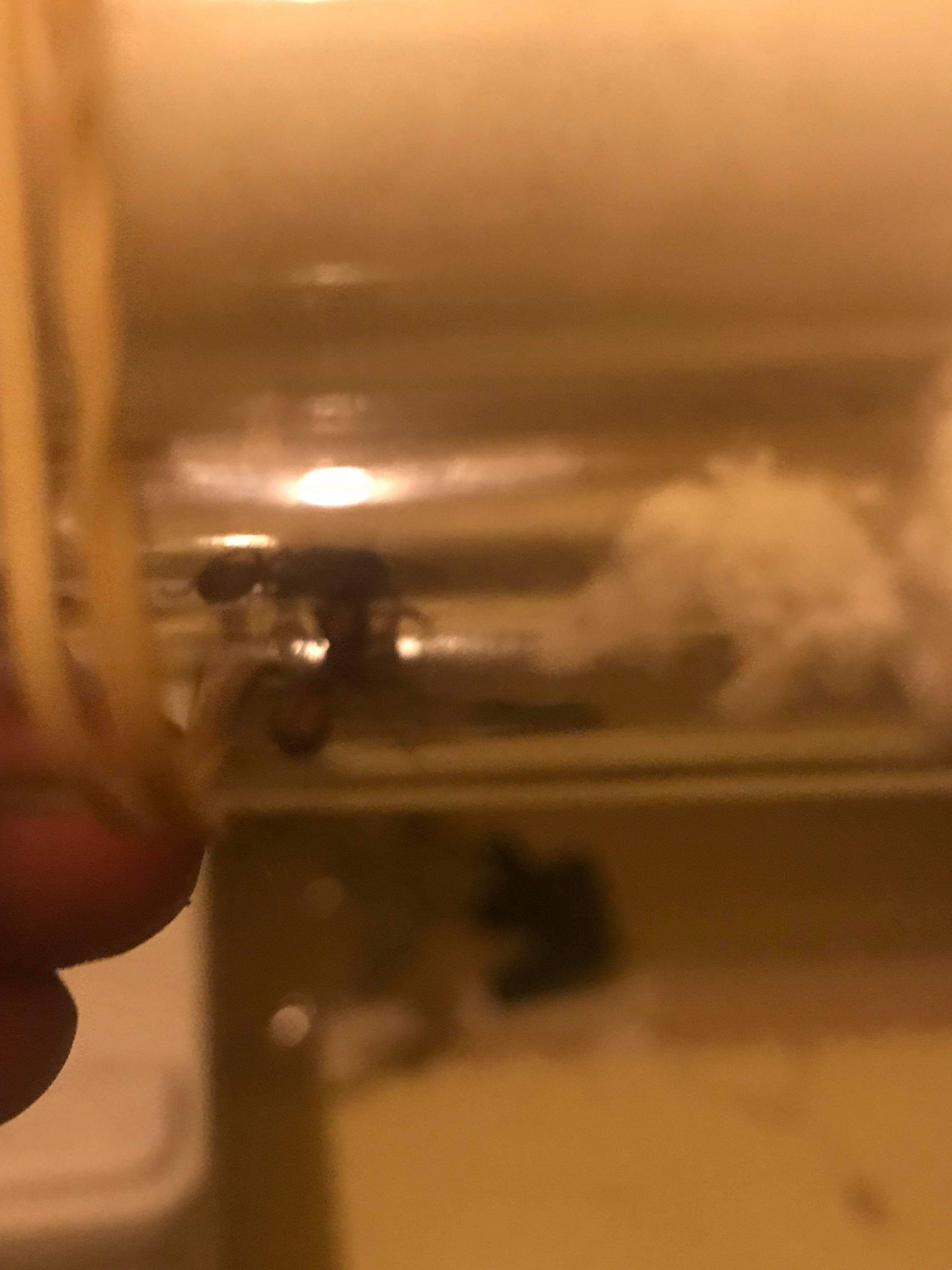 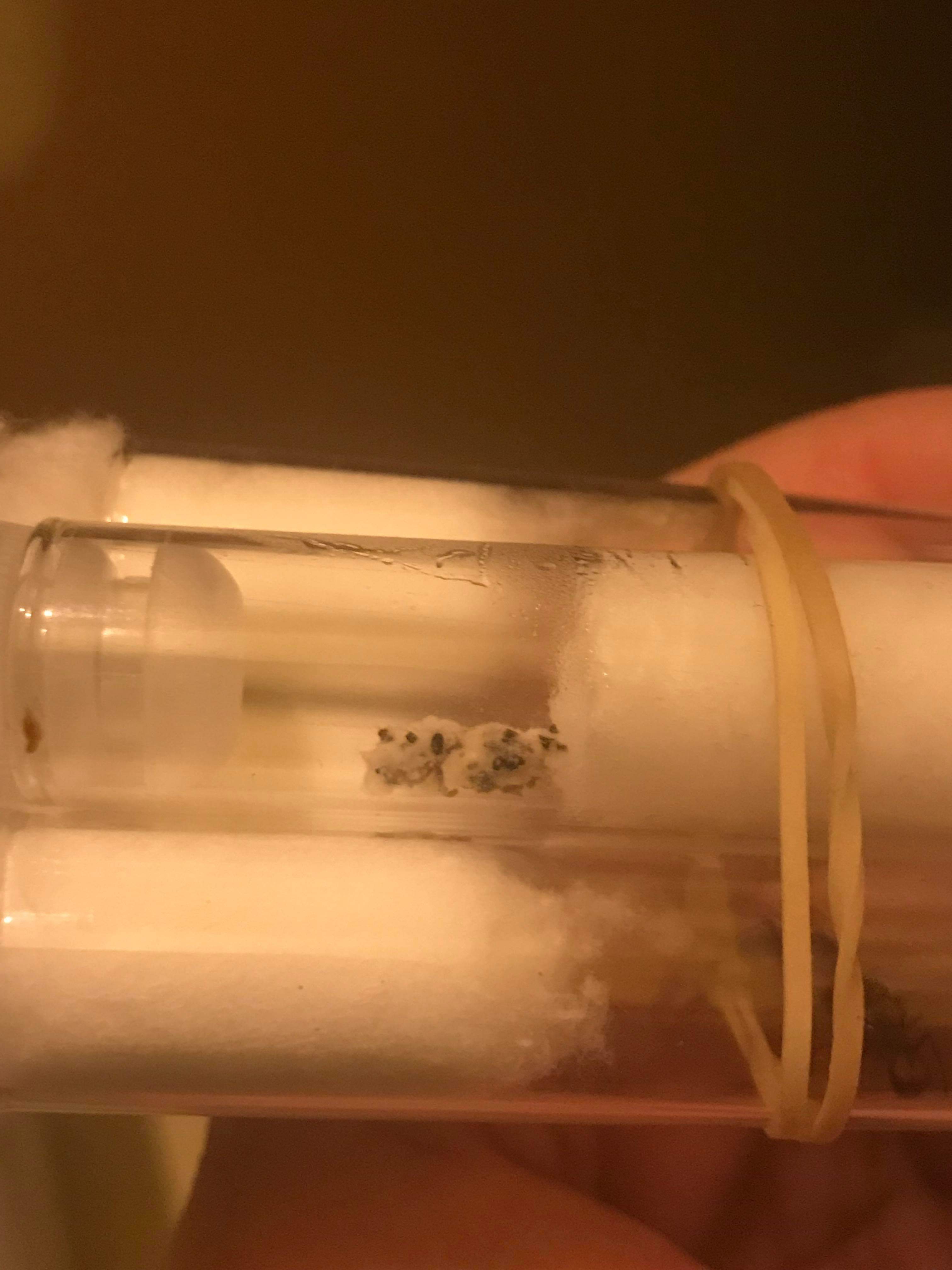 Well that is it for first post, more on the way so stay tuned
Top

So here I will show you all the Queens and what started happening that has lead to today. 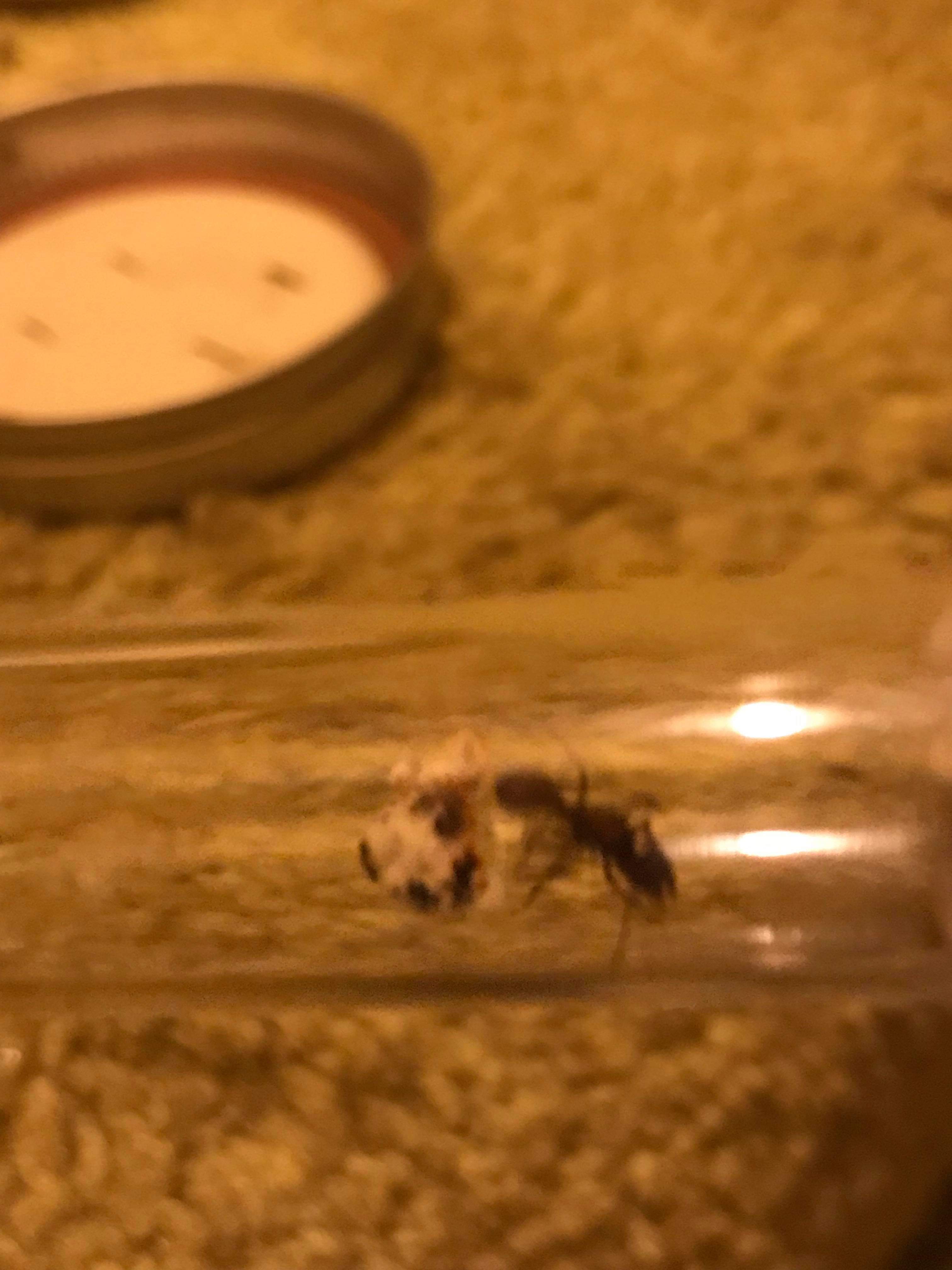 This queen was very excited about her fungus and ran for it. As you can see in this picture she is standing guard over it. To this day she still does this every time I come around with my light and phone to take pictures. Very protective. 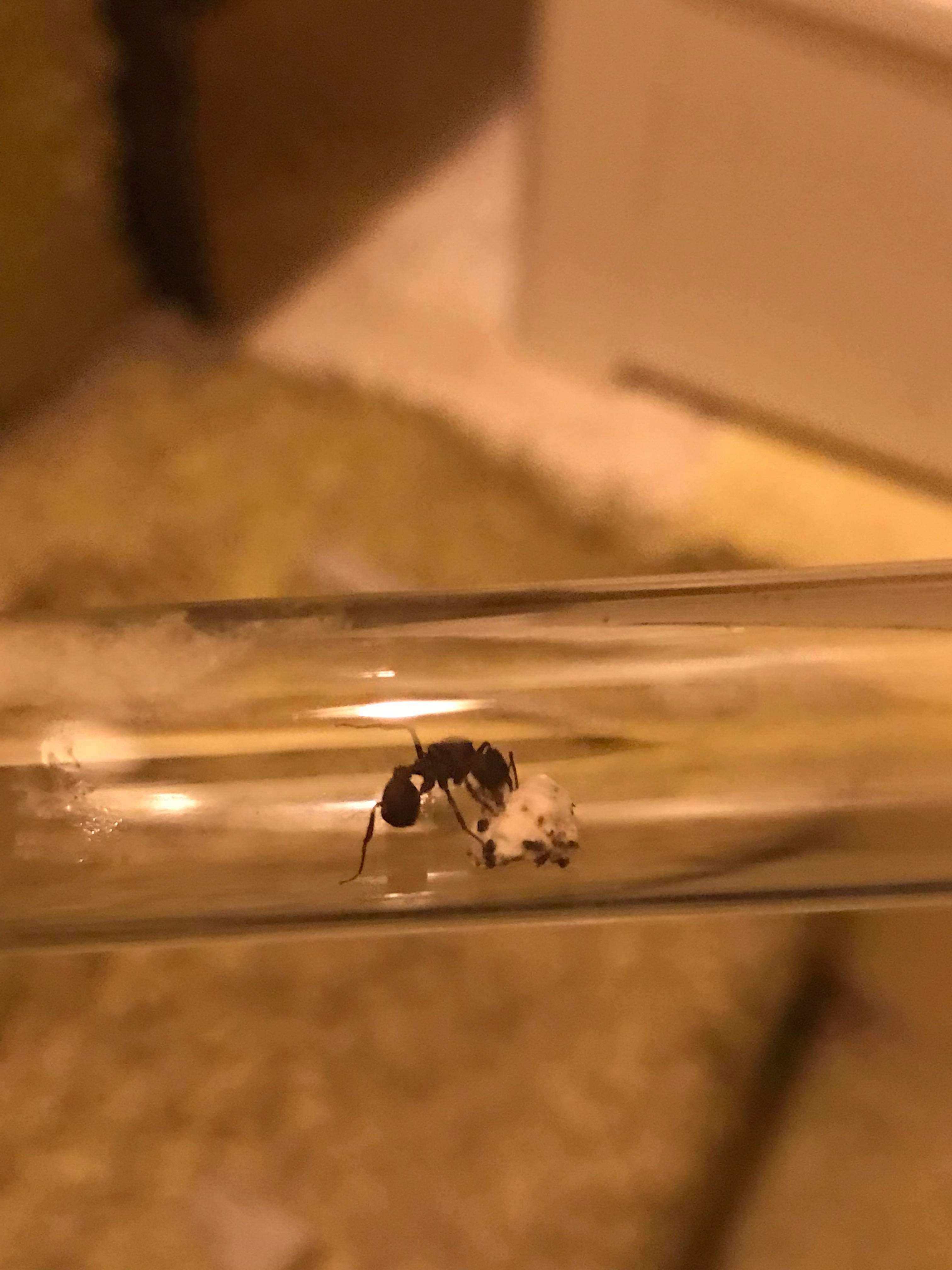 This queen started taking bites out of the fungus and moving the bits closer to the water logged cotton of her test tube. 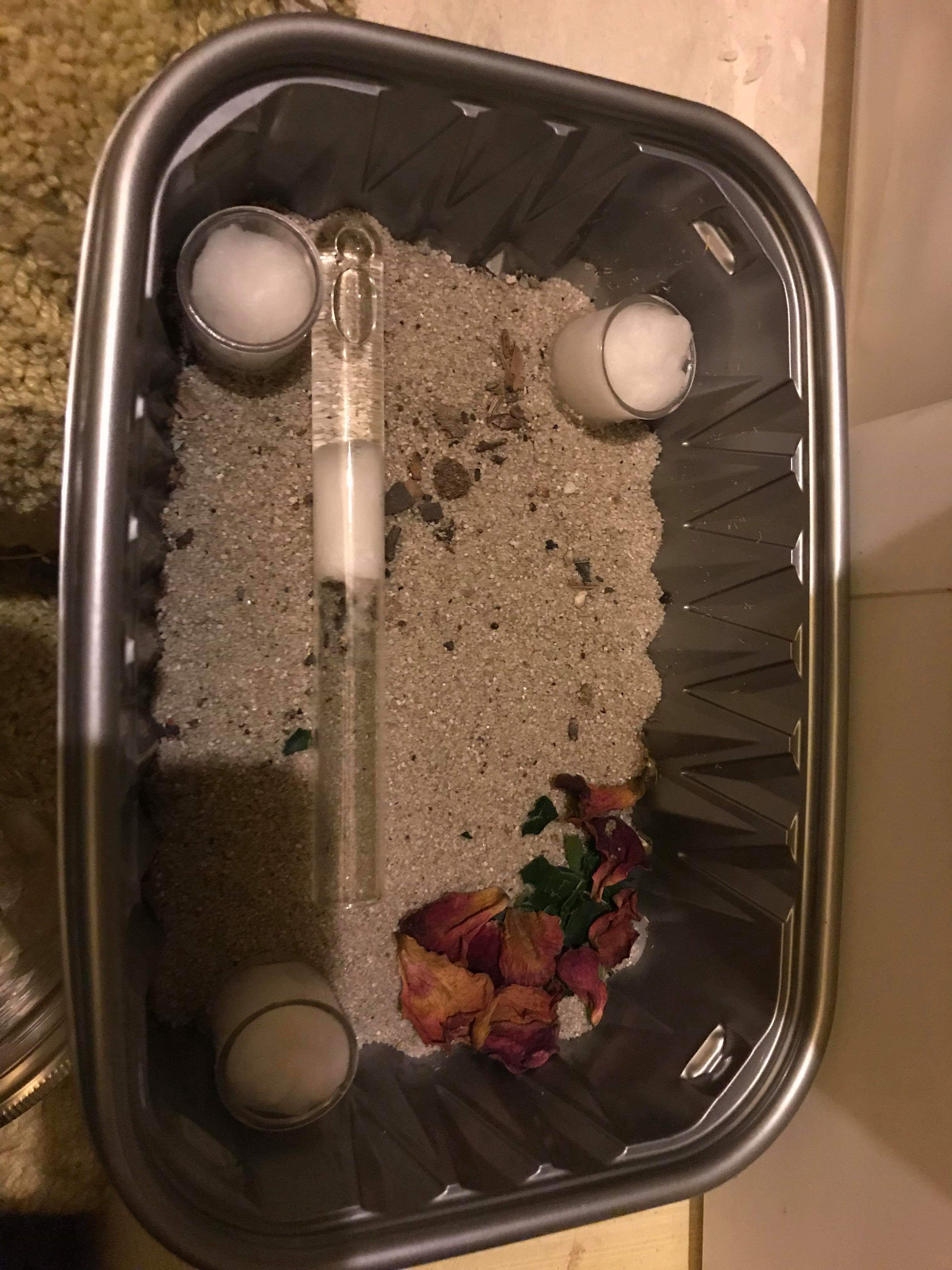 The set up! Small Tupperware containers I got at the 99 cent store. Some white sand, and rose leaf and petals I got from my grandmother's rose bushes. The snap caps are filled with liquid and cotton balls for humidity. Don't worry I add more stuff for humidity later.

Well part two is over, part three is on the way
Top

Part three we will meet the queens and how they were doing last week. 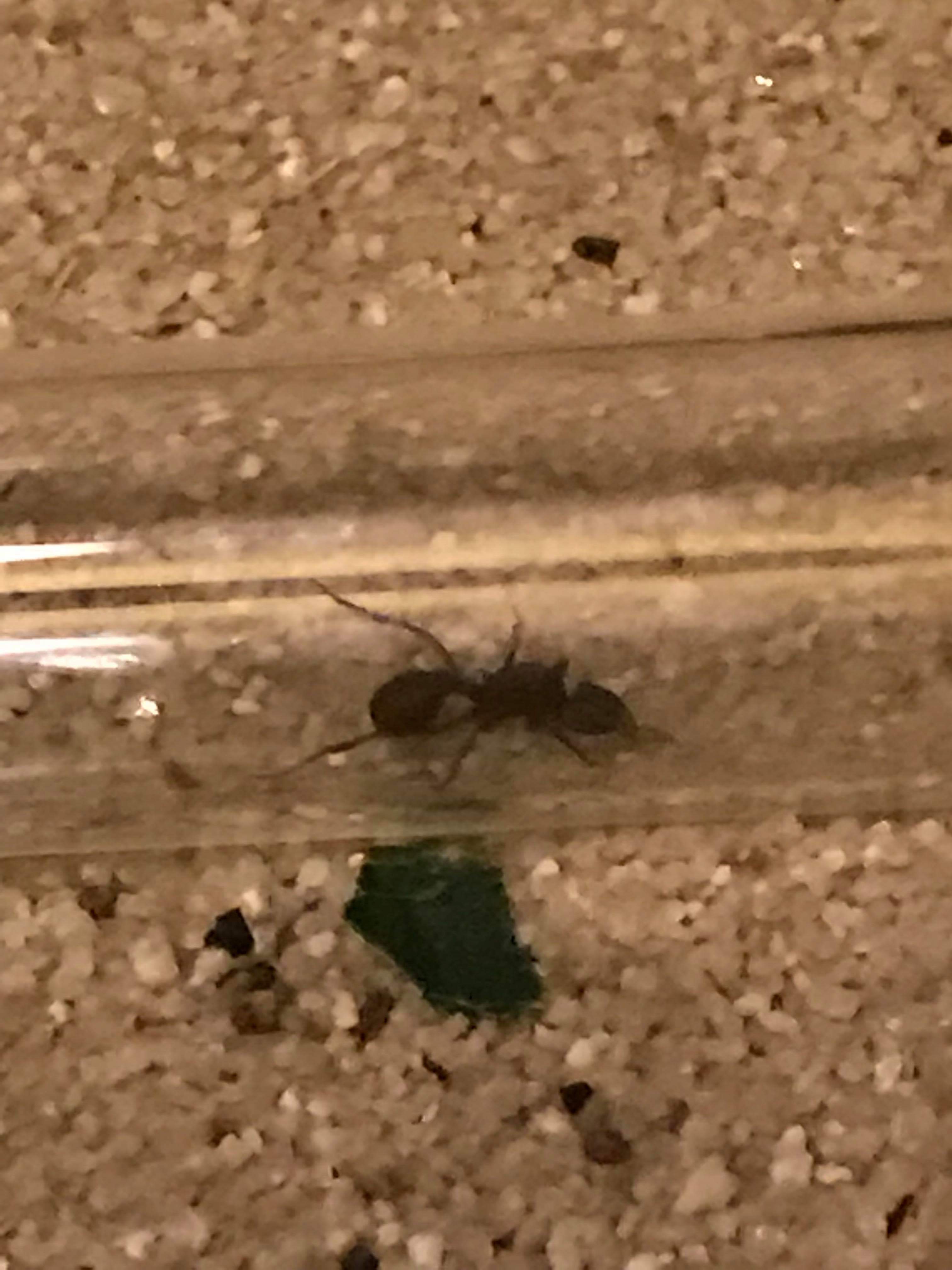 This queen is one of the three I bought but was never given fungus. Not much to say here. 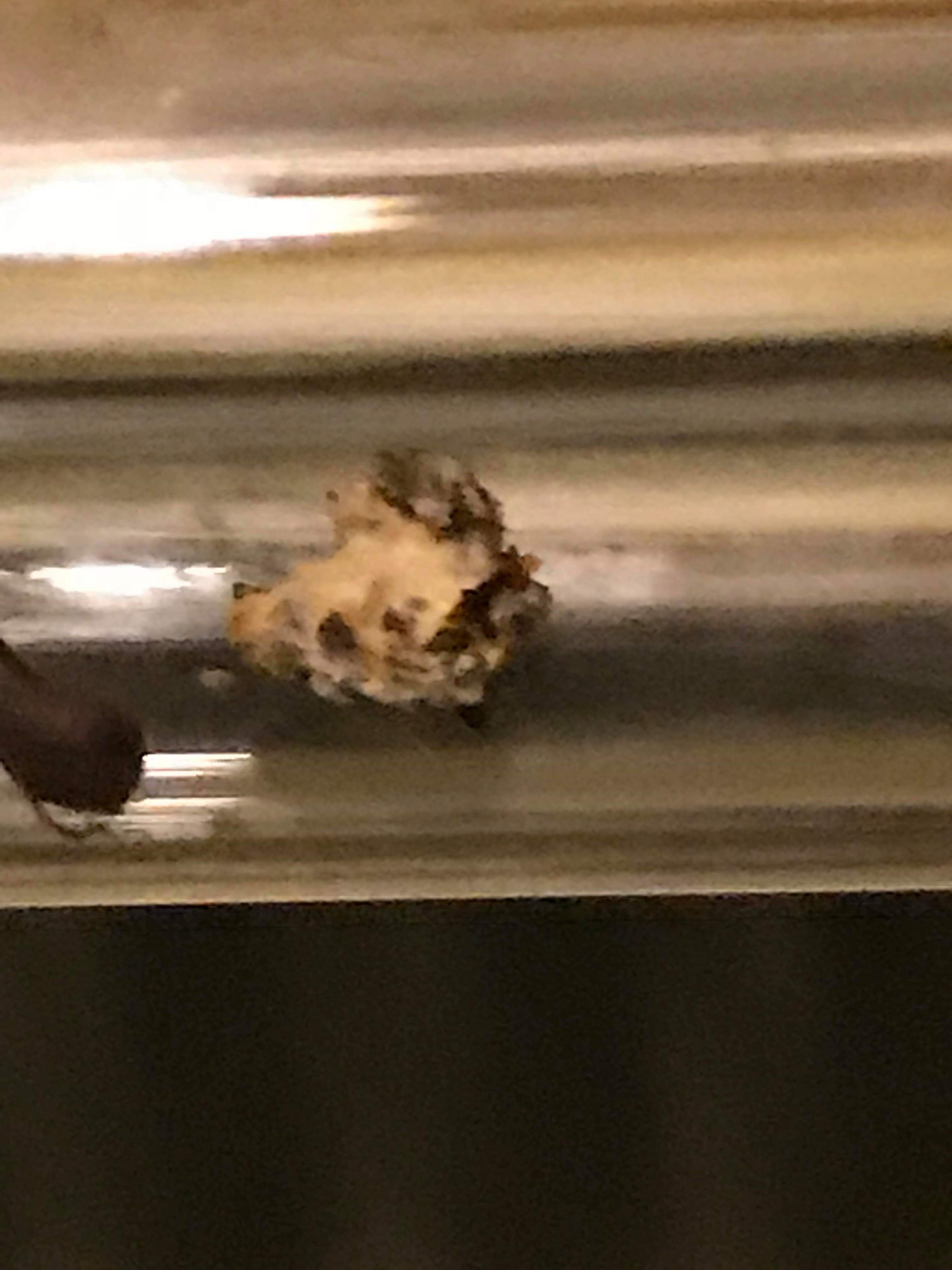 This is that very protective Queens and her fungus. As you can see there is some black on it where she was adding leaf and rose petals to it. 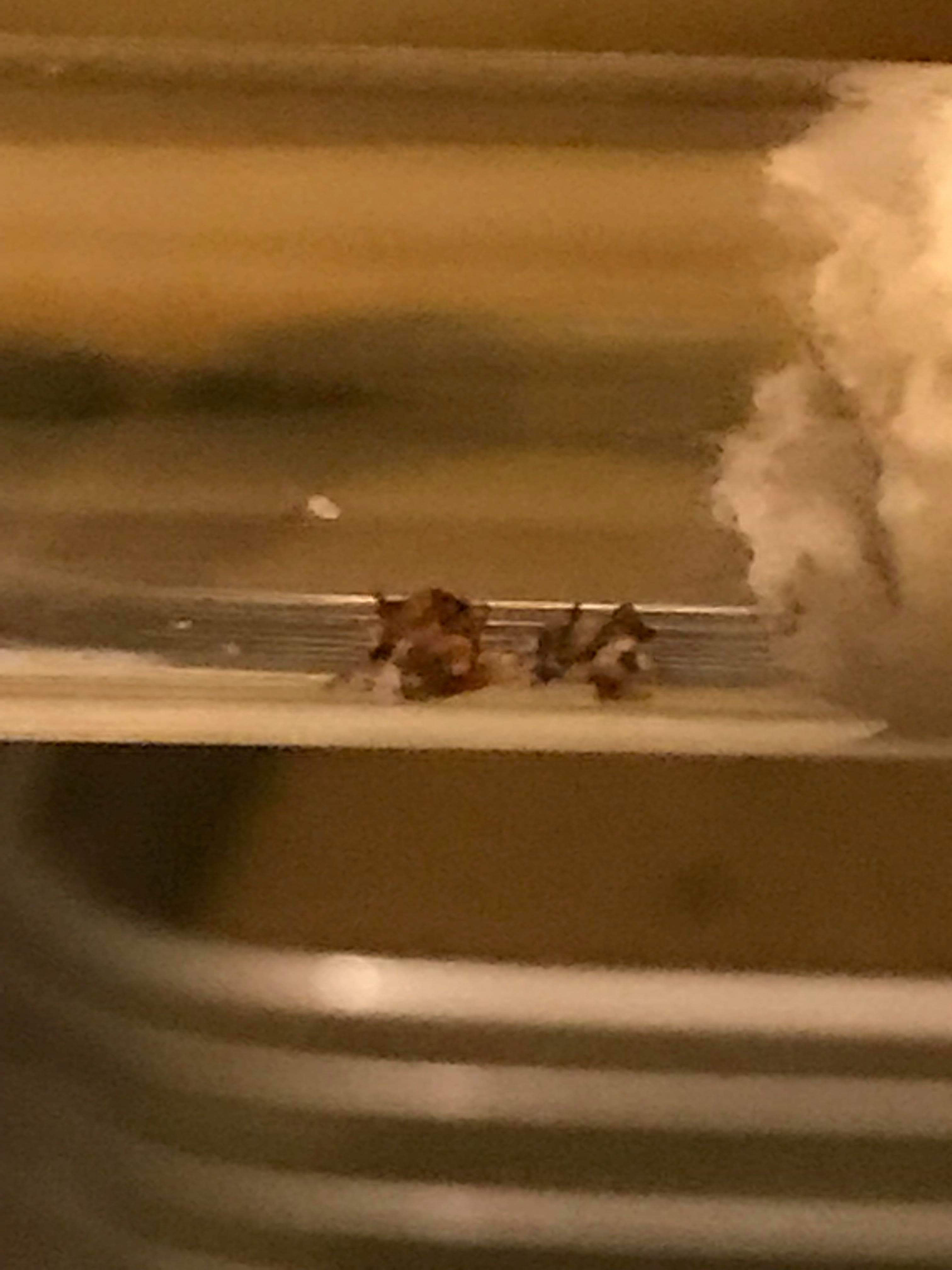 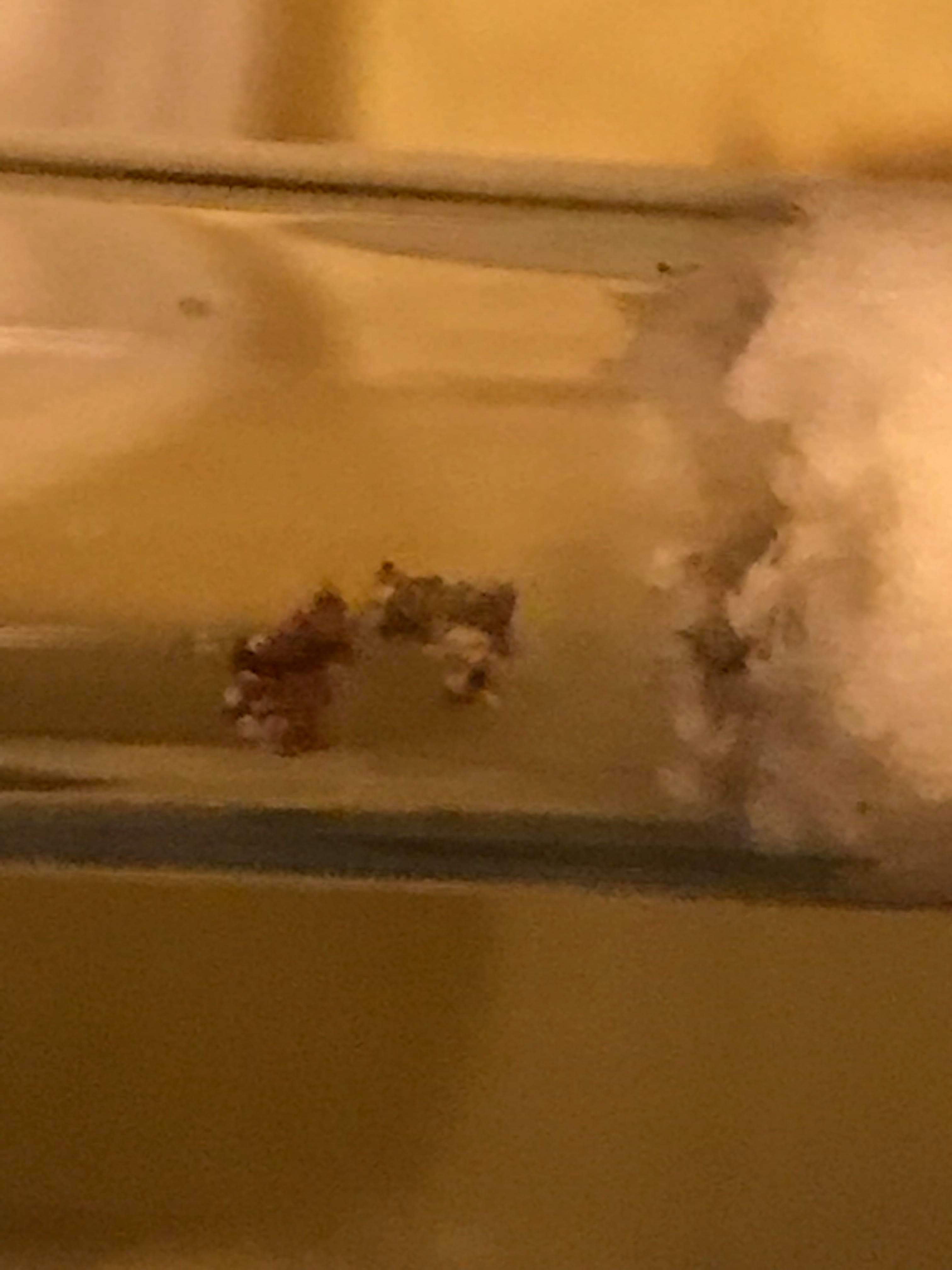 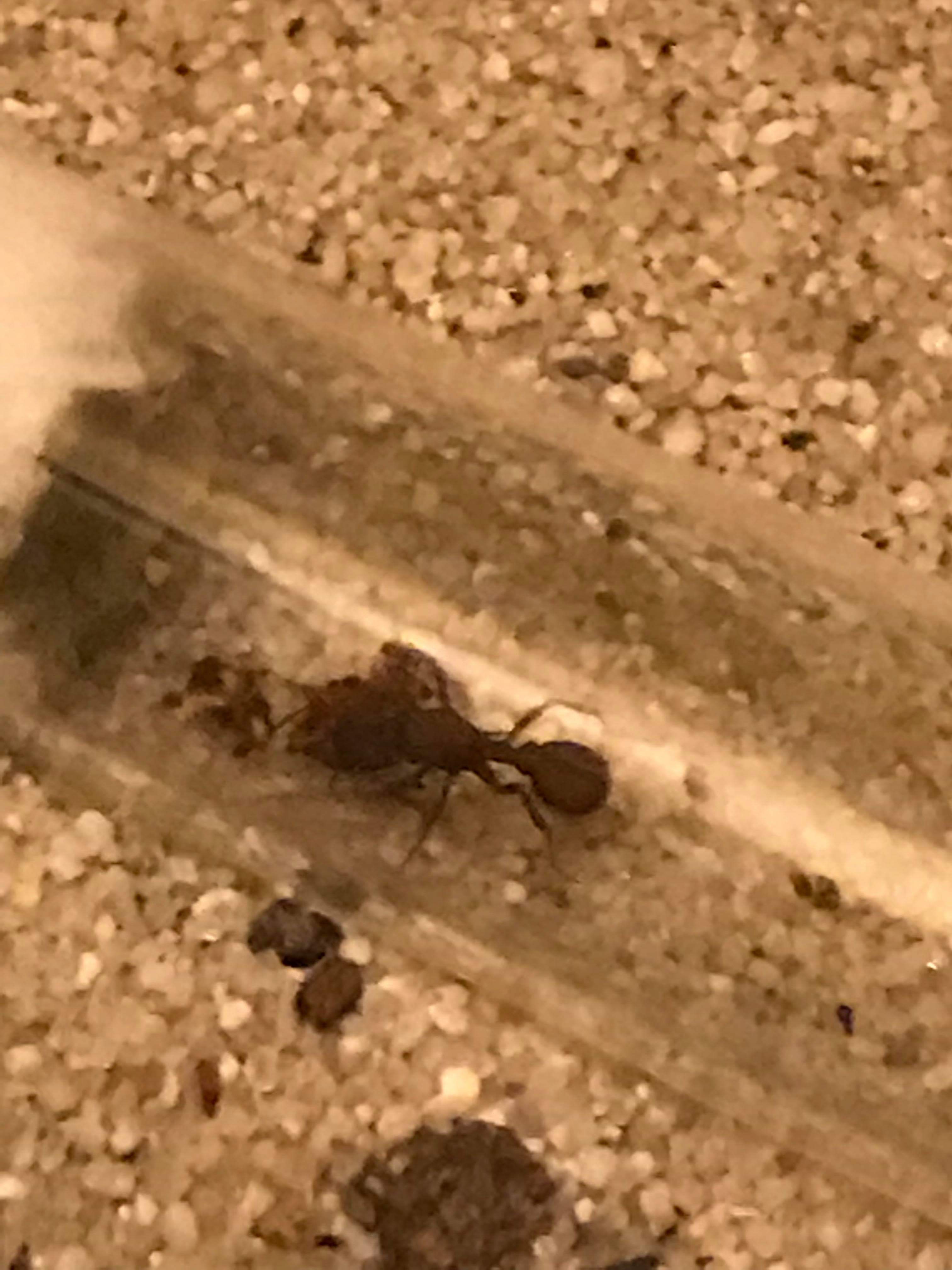 This is the fungus that one queen tore up. As you can see the left half is orange and dried out and dying. The piece on the right has a little bit of white and is barely hanging on to dear life. I was so worried thinking she had killed it. 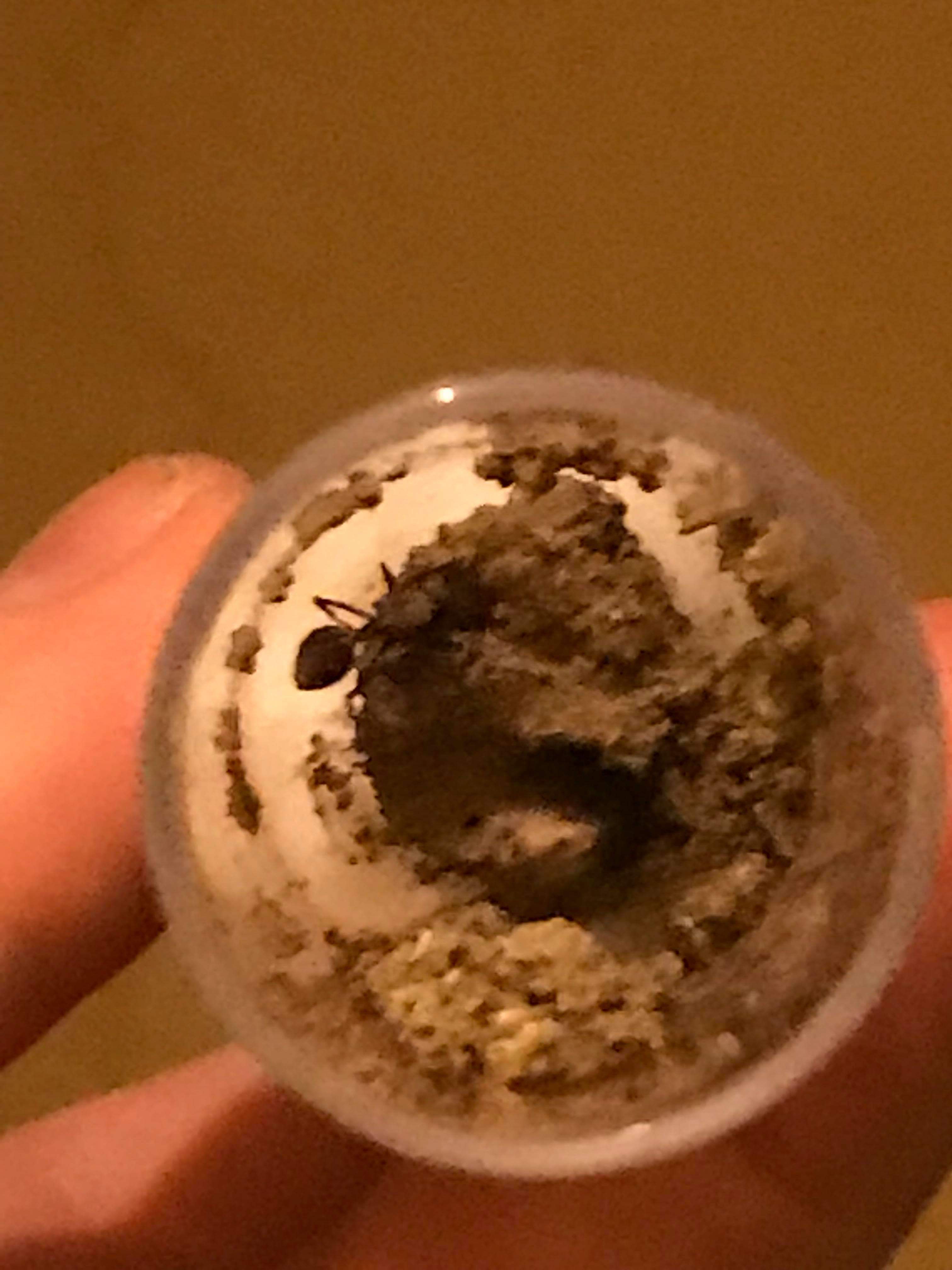 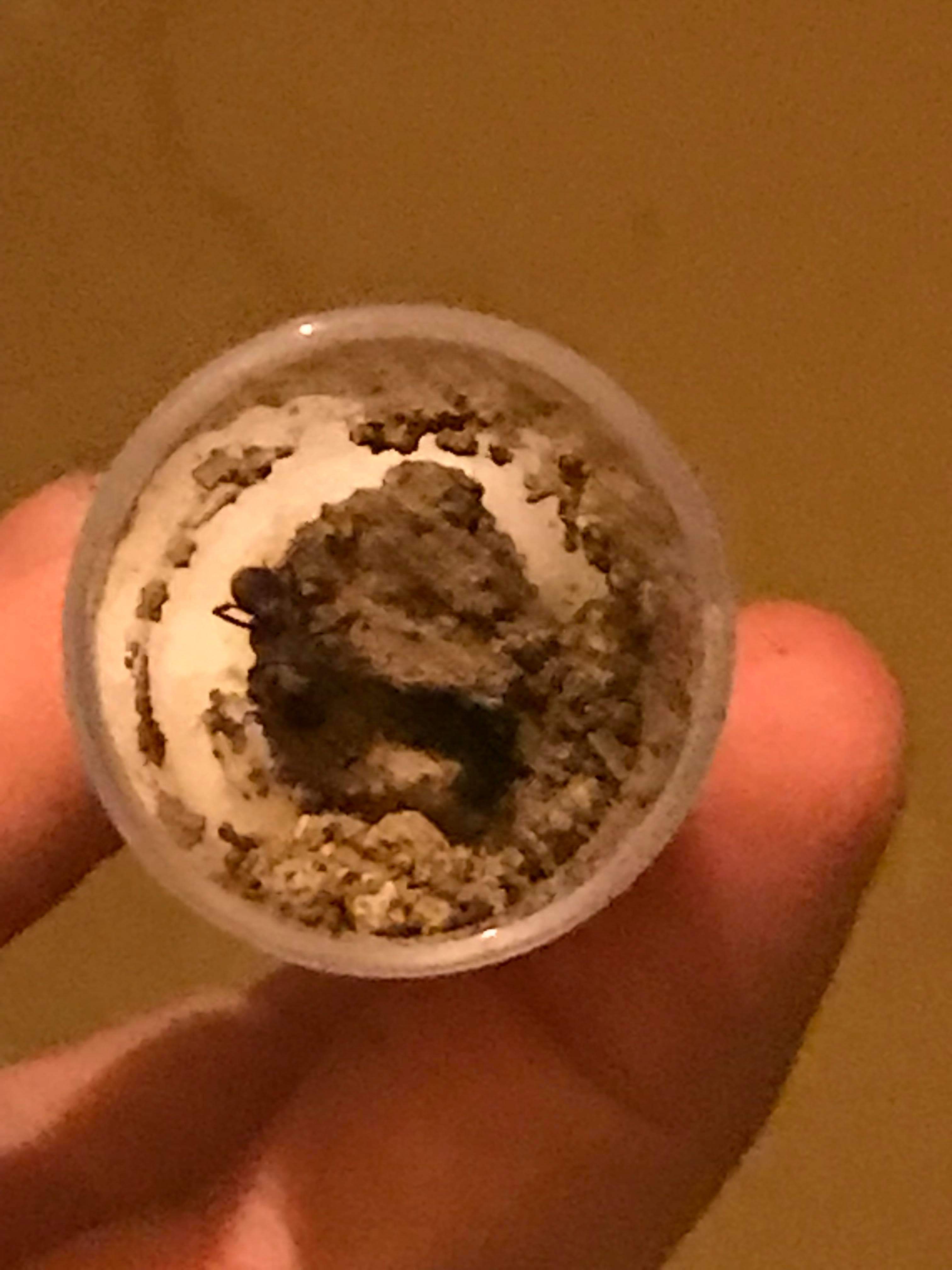 My first Queen. The mud is what I took the homein since I didn't have test tubes at the time and only had snap caps I had to improvise.
Top 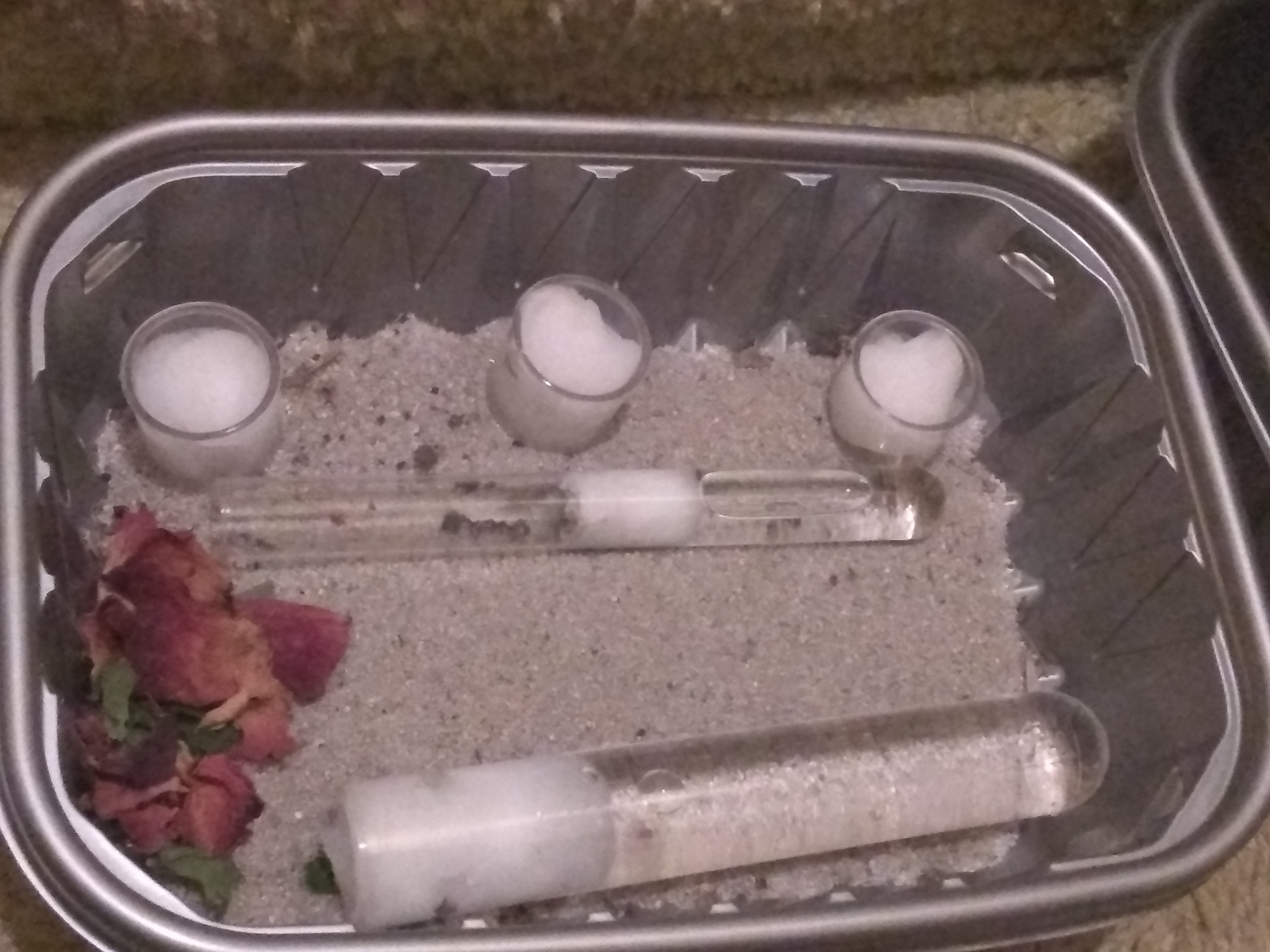 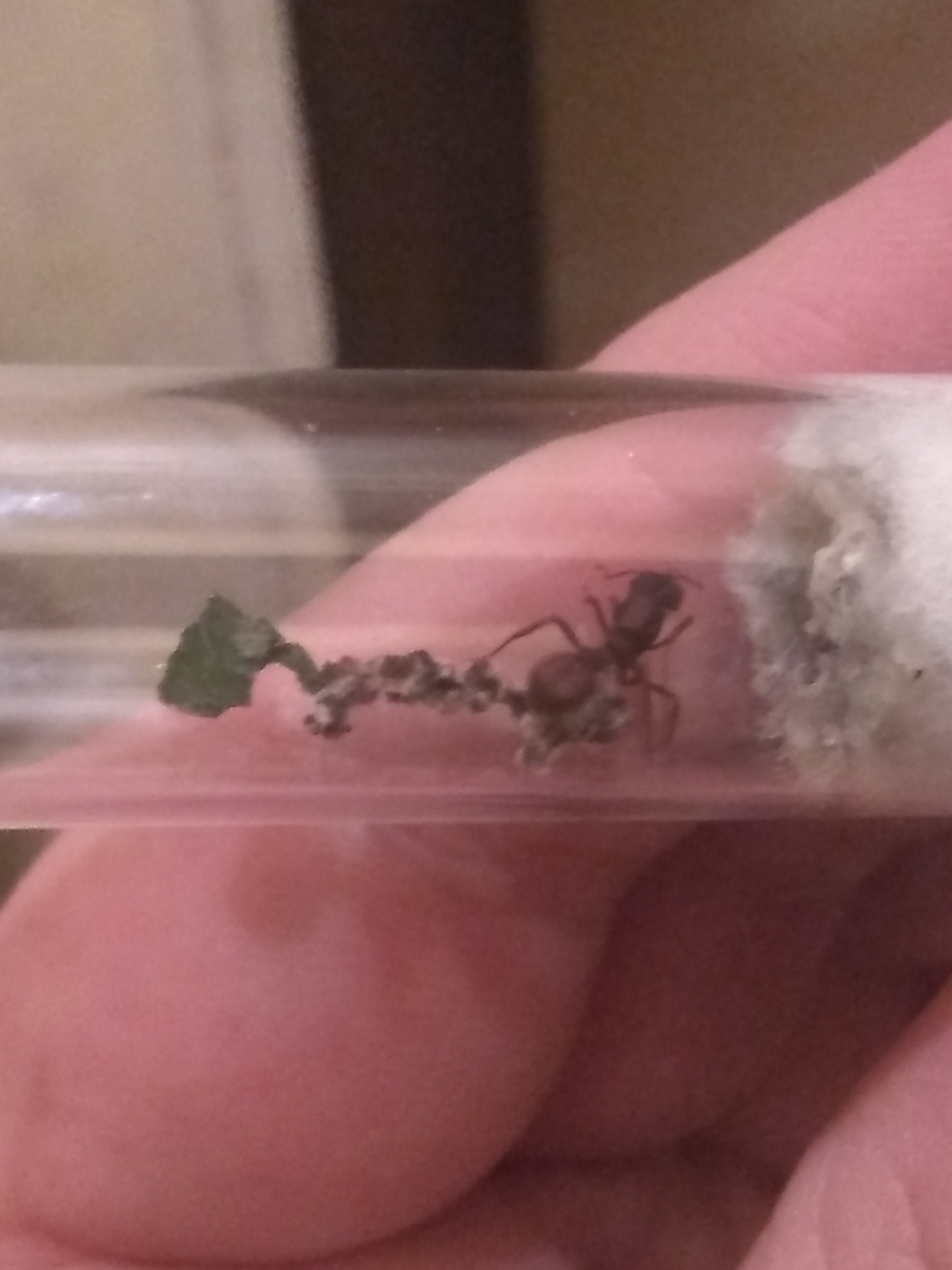 Remember that queen I was worried killed her fungus? Look what she managed to do! She fixed it. Ants sure are amazing. 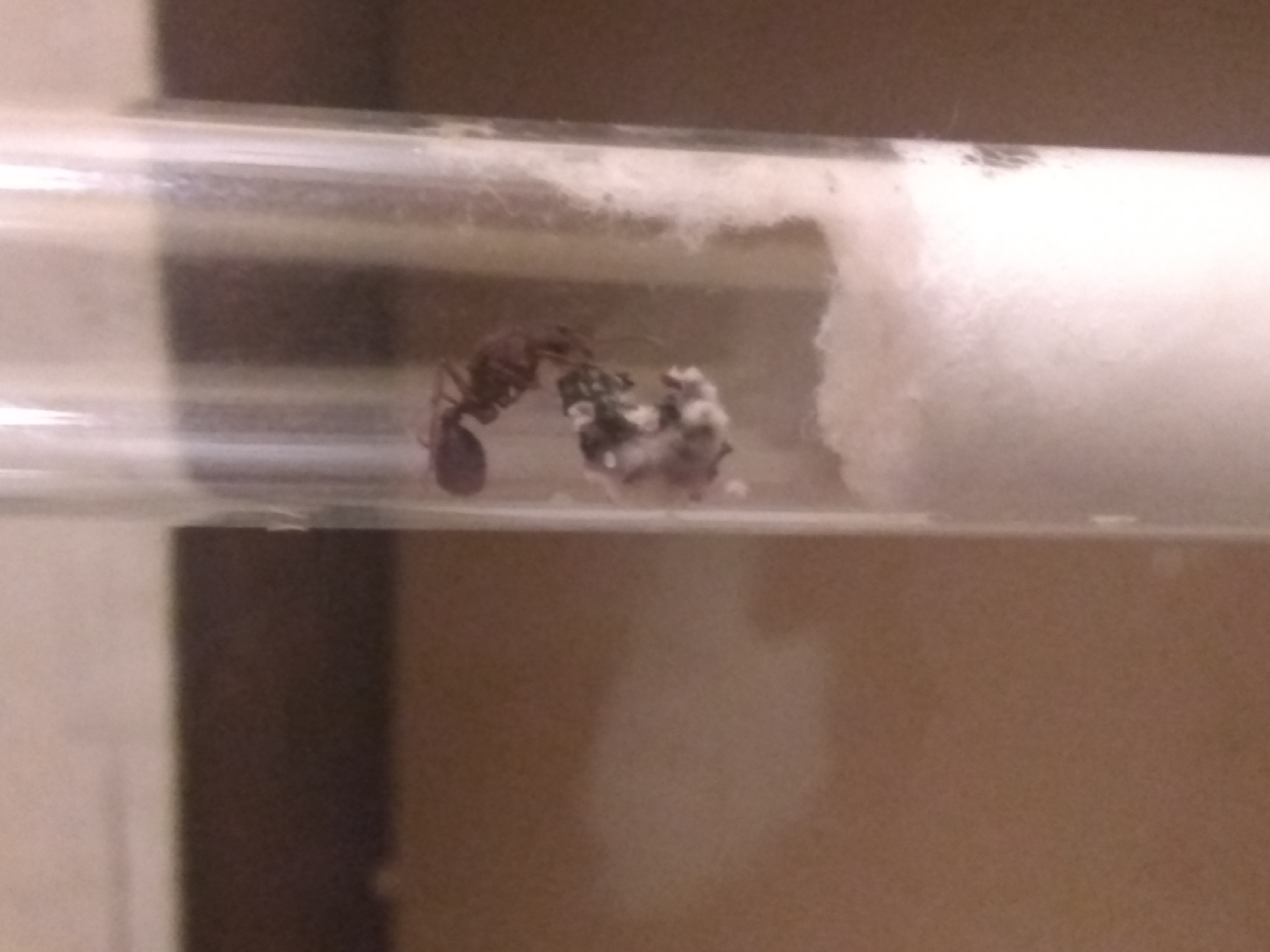 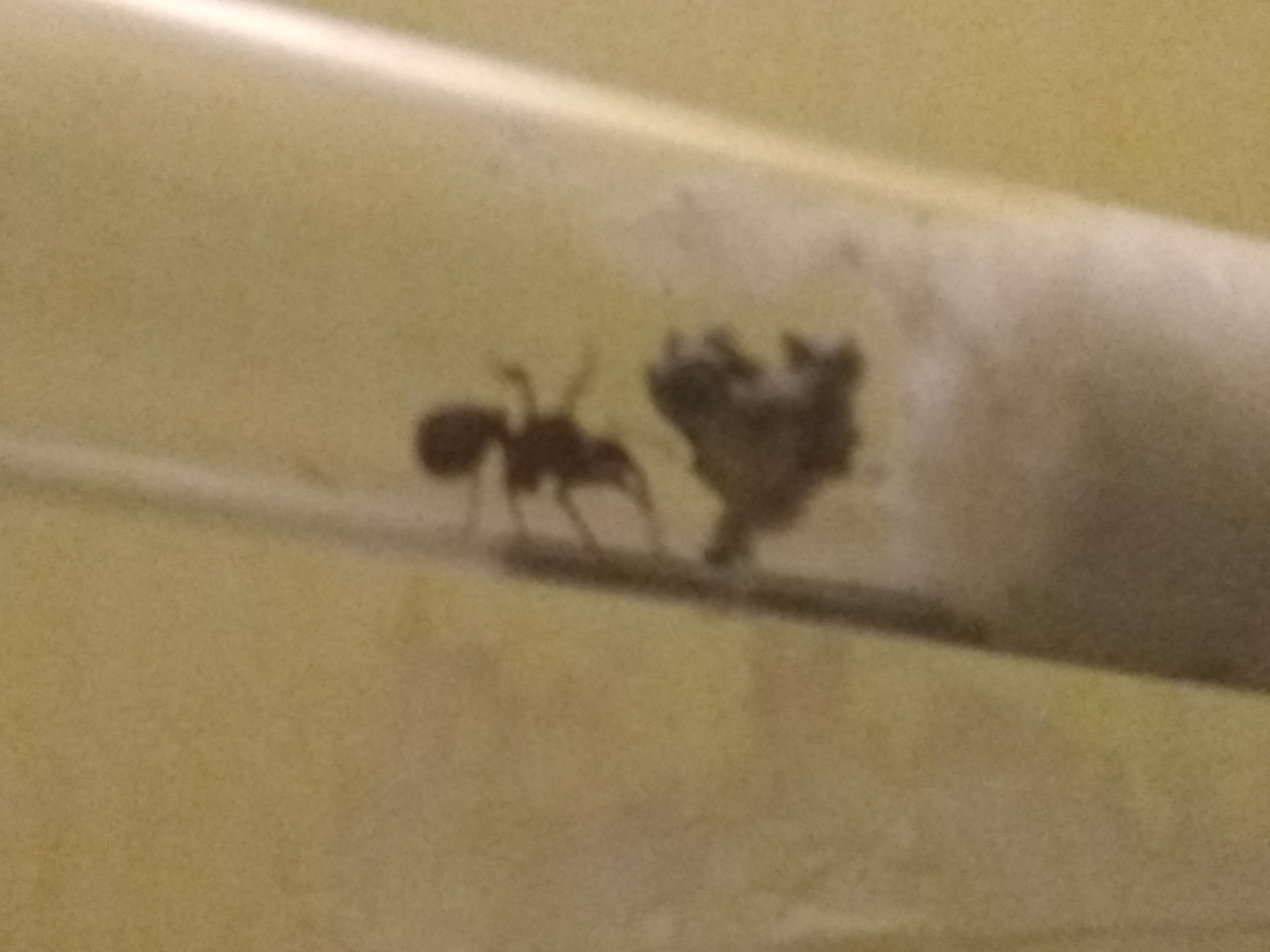 Other Queens fungus getting bigger
Top

Update number 5 is very sad. I wanted to try and warm up the set ups since the nights started getting cold. So I used a heating pad made for sore muscles on the lowest setting. Luckily no ants died but one of the Queens(who was placed directly on the pad) her fungus disappeared. I am still beating myself up over this tragedy. 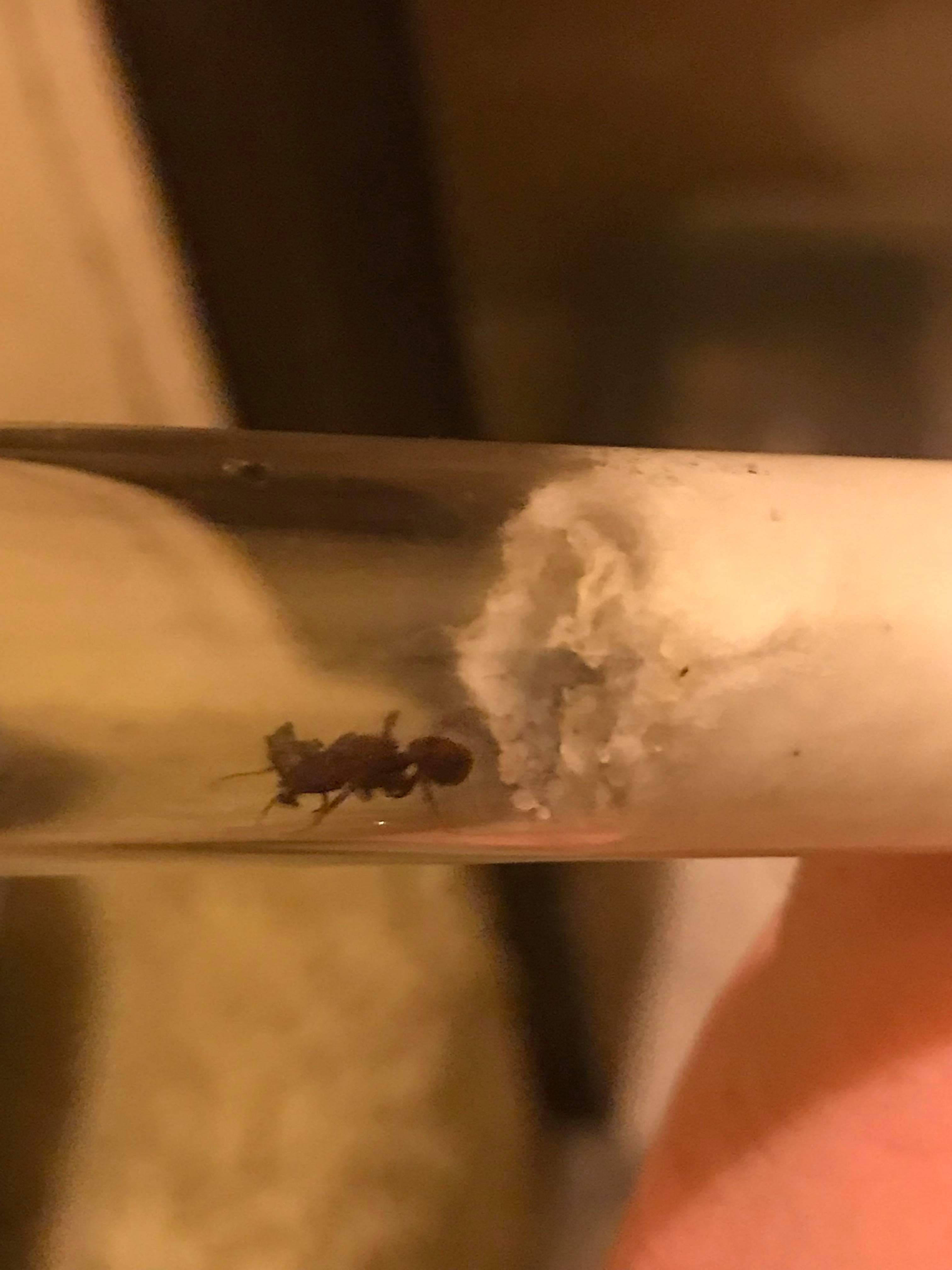 That small black spec was all that remained. This is the queen that had fixed her fungus and I managed to ruin all her hard work in one night. 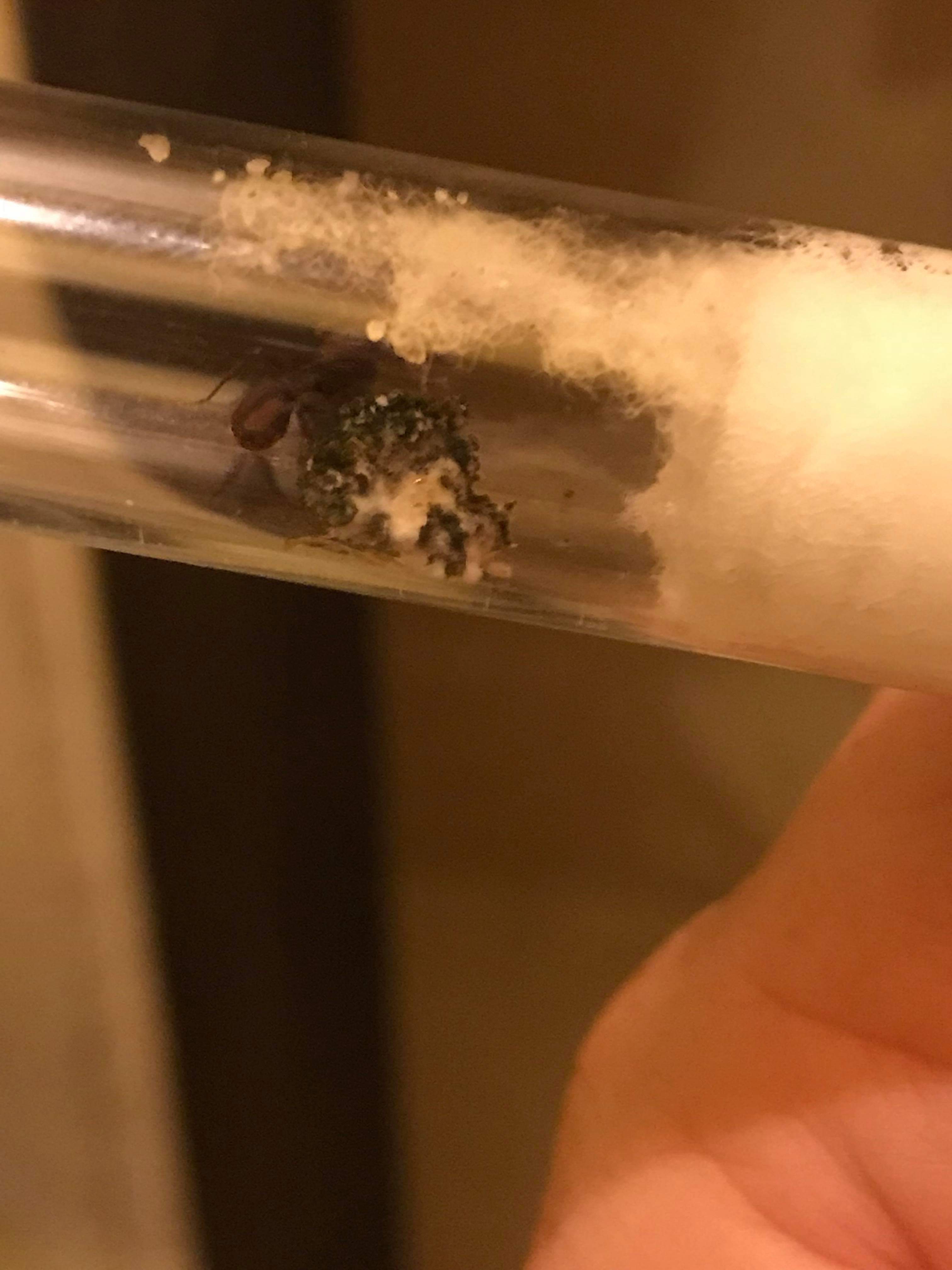 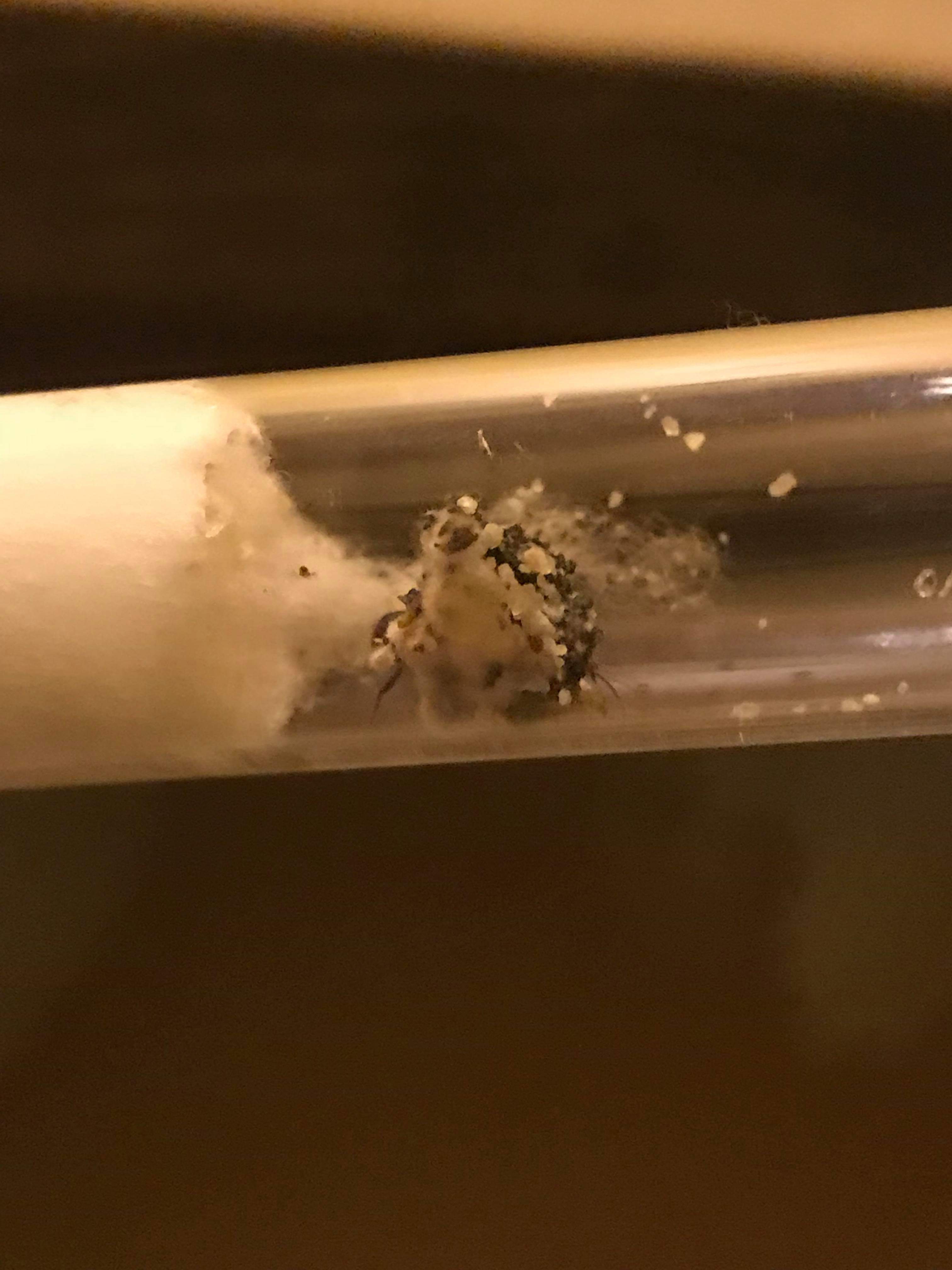 Post number 6 and we will be totally caught up.
I have bought reptile heating pads, and have them set up to a timer. I also got some temp/humidity guages to keep track of the temp and humidity levels better. 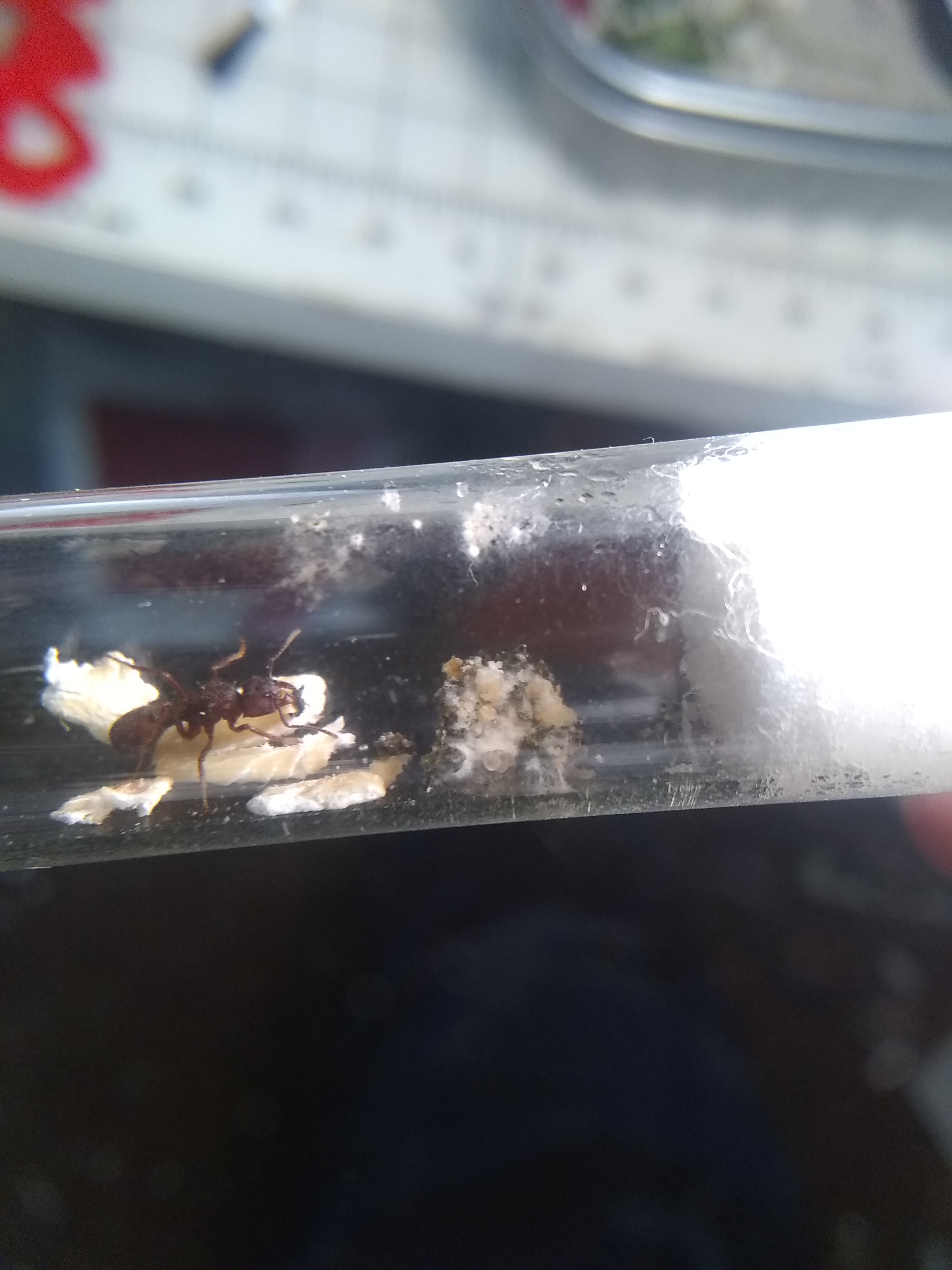 I started adding oatmeal to the food stuffs. Now it is hard to spot but in the center bottom of the fungus you can see eggs 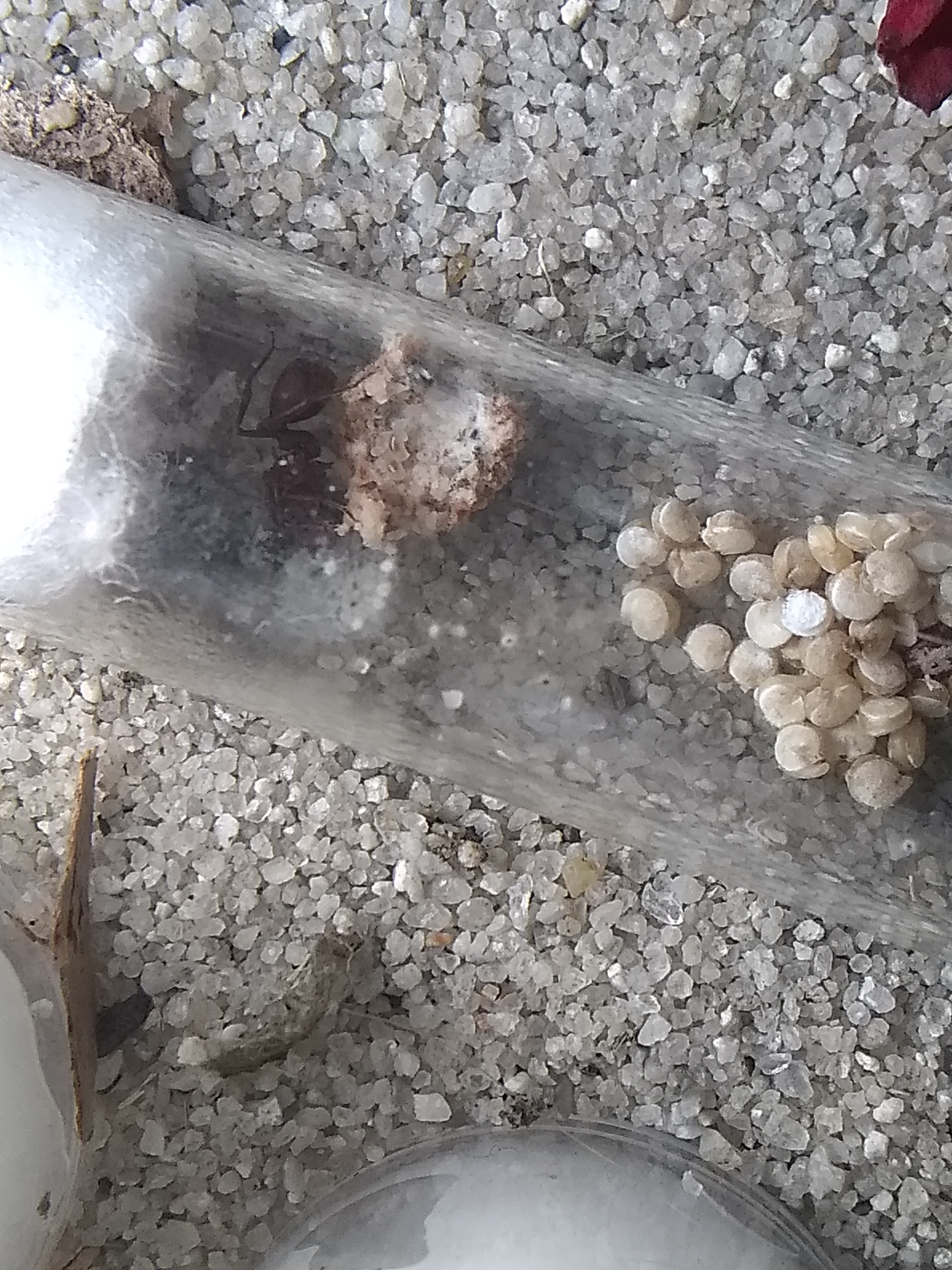 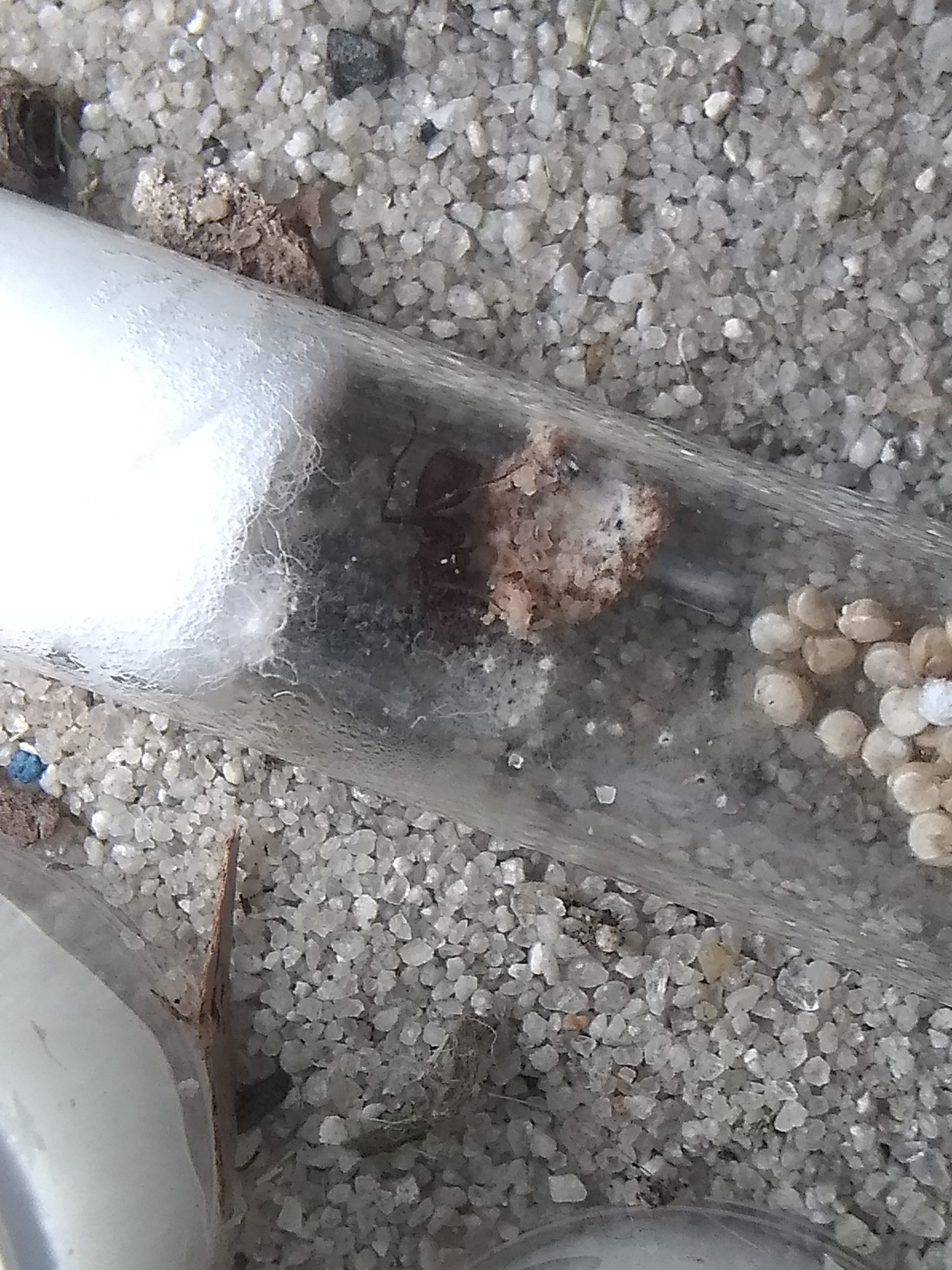 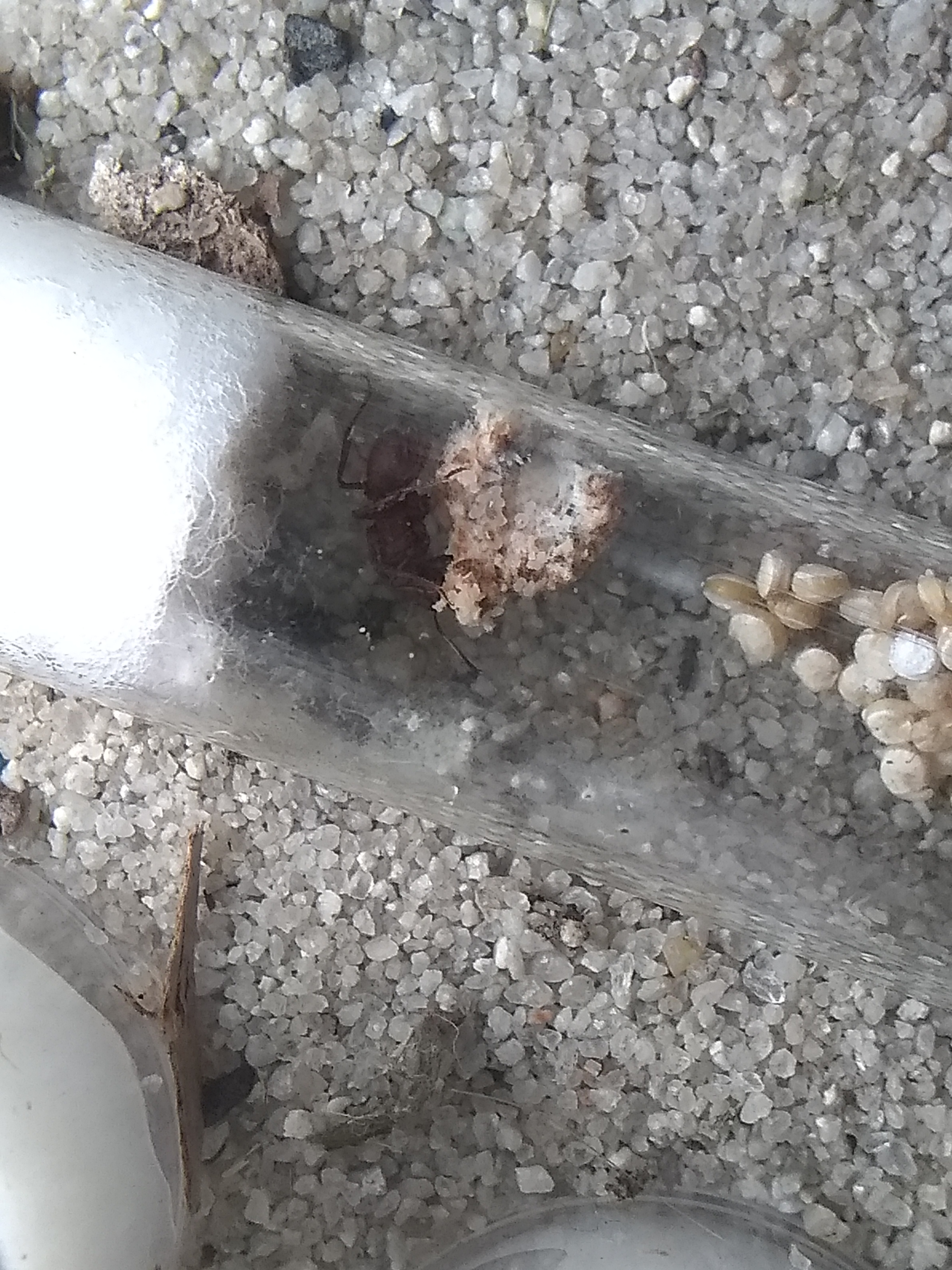 In these pictures you can see I added quinua to the food stock. And it looks like the eggs hatched and there are now two larvae, you can kind of see them on the left hand side of the fungus. 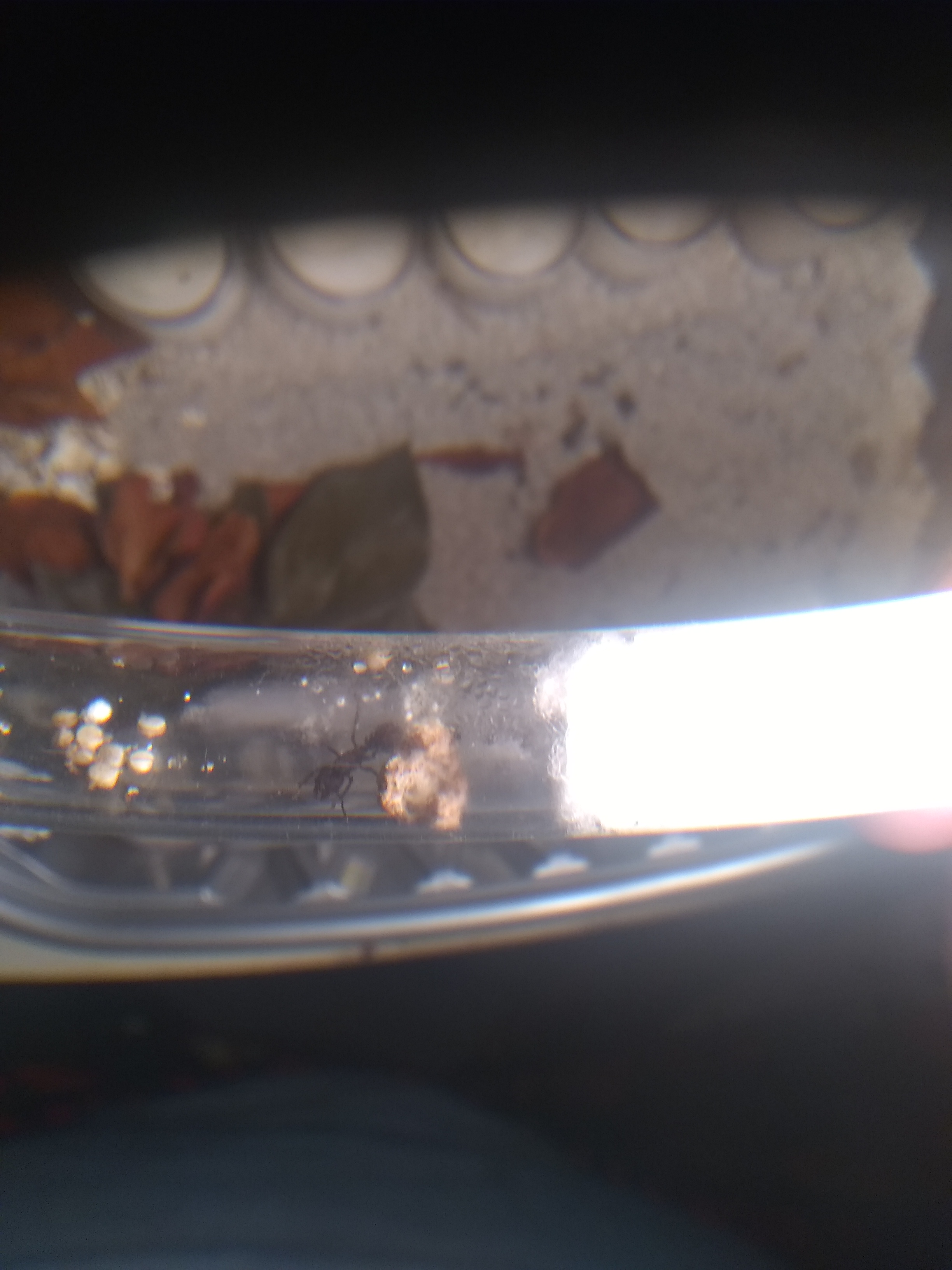 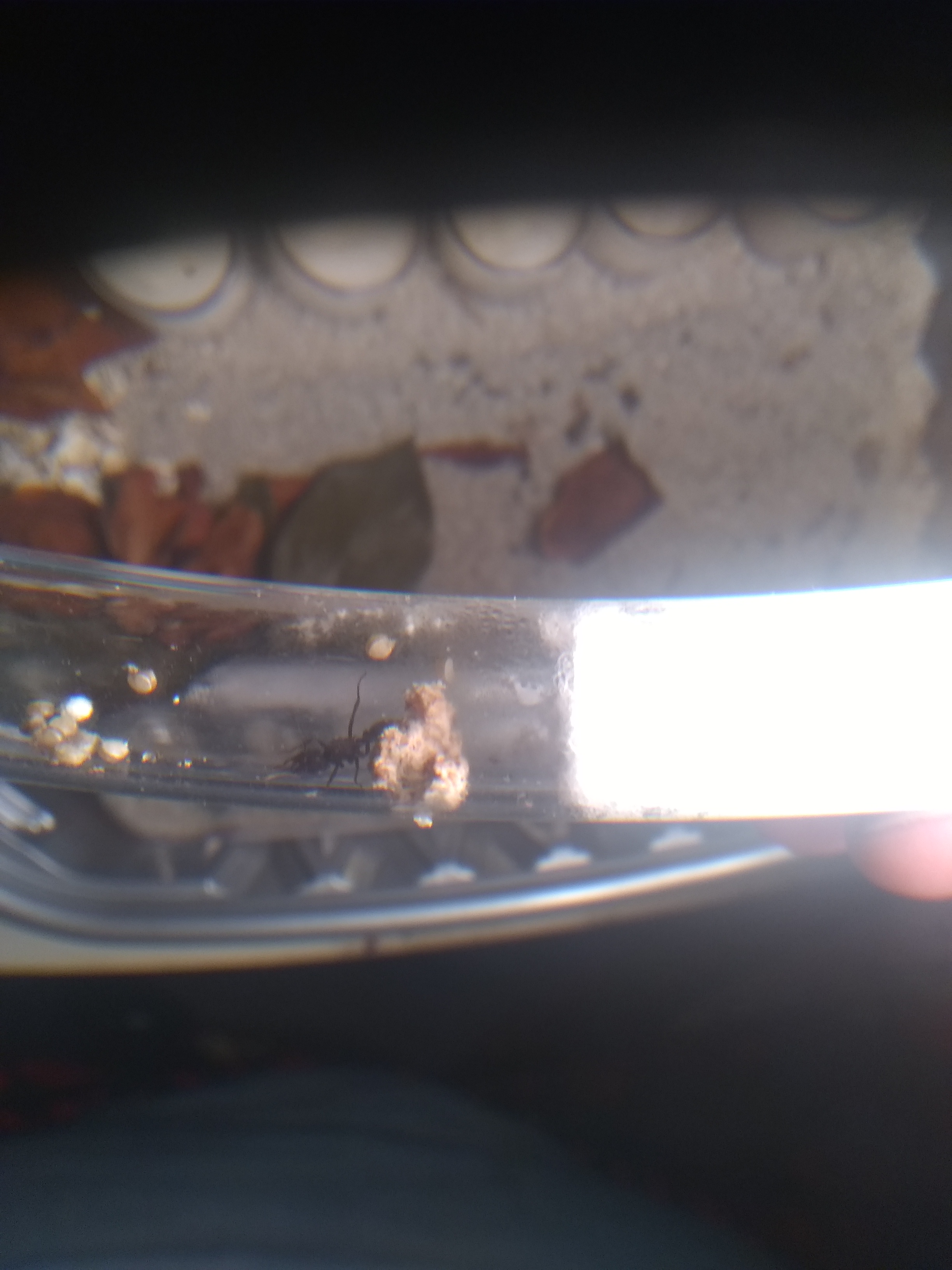 Current pictures as of tonight, not the best quality but as you can see the fungus is mostly white but there is this bit of orange around it. Is that pretty normal? Just want to be sure the fungus isn't dying on me
Top

Its looking good, you should have workers soon and they can step up leafcutting and get that fungus growing.

The orange fungus is a bit worrying, it usually means its dead or dying, white is healthy fungus. Grey is what you really need as its fresh growing fungus. Whats your plans for expansion? Humdity? Still going for the brick thing?
Top

But now I'm worried that you mentioned that orange is bad. This is all the fungus I got if it dies it's game over and there won't be plans for the future.

Yeah beginning to worry now. Checked on it this morning still has that orange color in spots and it hasn't really grown in days. It doesn't even look like she's adding substrate to it any more. I thought maybe the orange was oatmeal but it's been days with little to no growth, but it's not shrinking either... Not sure what's going on
Top

What are the conditions like where the fungus is? Humidity and temp is vital, and you need readings exactly where the fungus is, they might differ quite a lot from the enclosure the test tube is in. My fungus when I received it was about 60 - 70% orange/brown and they ended up dumping most of it and I wasn't left much at all. They seem to have bounced back though so never lose hope